A mathematical model of the muscle cross-bridge (XB) cycle based on Huxley’s sliding filament theory which explicitly accounts for the chemical transformation events and the influence of strain on state transitions.

Despite extensive study over the past six decades the coupling of chemical reaction and mechanical processes in muscle dynamics is not well understood. We lack a theoretical description of how chemical processes (metabolite binding, ATP hydrolysis) influence and are influenced by mechanical processes (deformation and force generation). To address this need, a mathematical model of the muscle cross-bridge (XB) cycle based on Huxley’s sliding filament theory is developed that explicitly accounts for the chemical transformation events and the influence of strain on state transitions. The model is identified based on elastic and viscous moduli data from mouse and rat myocardial strips over a range of perturbation frequencies, and MgATP and inorganic phosphate (Pi) concentrations. Simulations of the identified model reproduce the observed effects of MgATP and MgADP on the rate of force development. Furthermore, simulations reveal that the rate of force re-development measured in slack-restretch experiments is not directly proportional to the rate of XB cycling. For these experiments, the model predicts that the observed increase in the rate of force generation with increased Pi concentration is due to inhibition of cycle turnover by Pi. Finally, the model captures the observed phenomena of force yielding suggesting that it is a result of rapid detachment of stretched attached myosin heads. 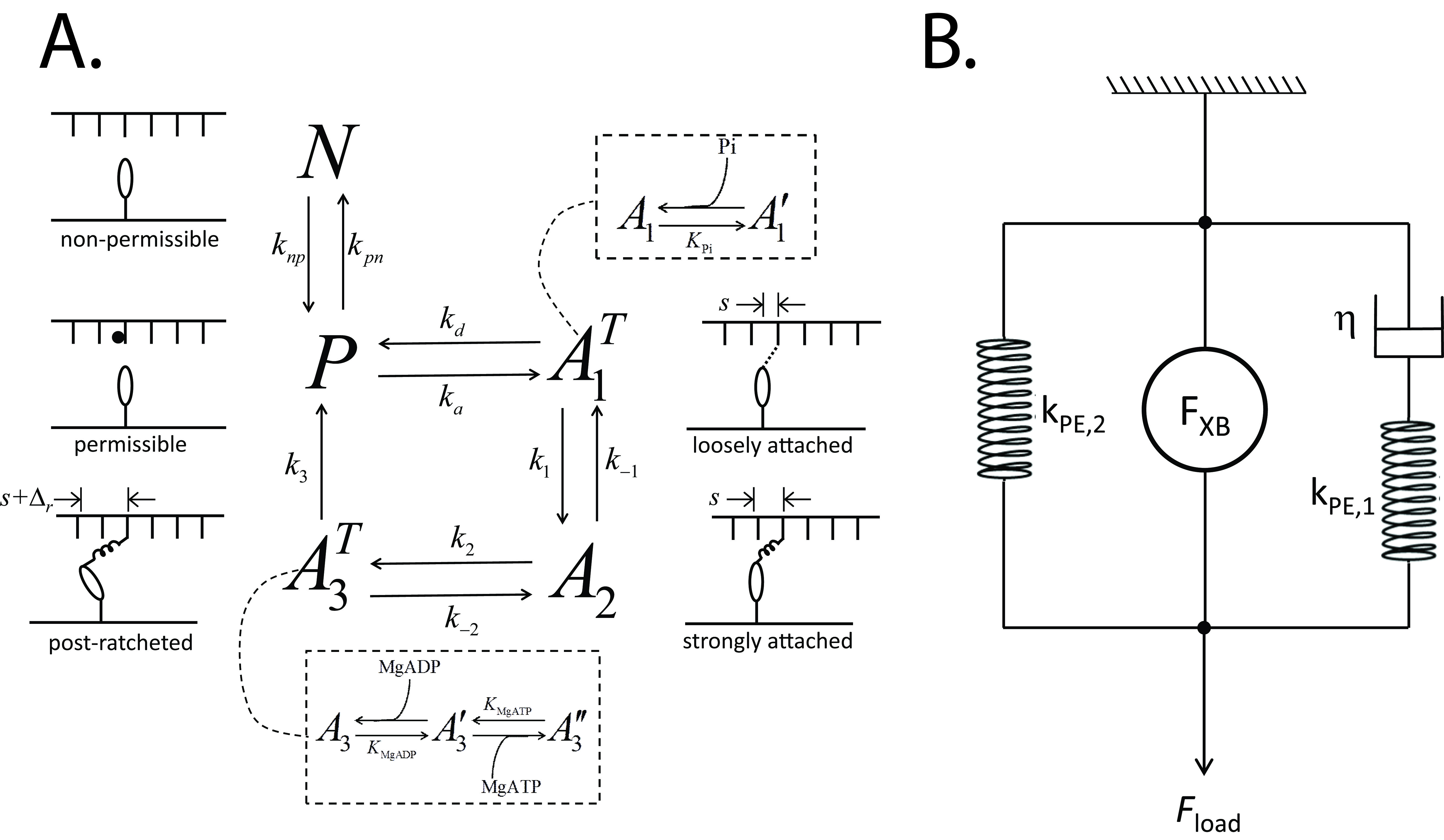 Figure: A) The proposed model of cross-bridge (XB) cycling. N is a non-permissible XB state where myosin heads cannot bind with actin (as in the absence of cytosolic $Ca^{2+}$), P is a permissible XB state during which myosin heads can bind with actin molecules (i.e. when cytosolic $Ca^{2+}$ is present, represented by black dot), $A_{1}^T$ is a loosely attached XB state (with [MgADP] bound). Pi, bound with A1 sub-state from the previous XB cycle, rapidly dissociates to form $A_{1}^\text{'}$ (shown with the attached dotted box); Pi binding/release step is assumed to be in rapid-equilibrium and has a dissociation constant $K_Pi$. $A_2$ is a strongly bound (pre-ratcheted or pre-powerstroke) XB state. $A_{3}^T$ is a strongly bound (post-ratcheted or post-powerstroke) XB state. It is assumed that the release of MgADP and binding of MgATP is in rapid-equilibrium (shown with the dotted box attached with $A_{3}^T$) and occurs after the force generation step (power-stroke); dissociation constants of MgADP and MgATP are represented by $K_{MgADP}$ and $K_{MgATP}$, respectively. B) Proposed mechanism of force generation in cardiac muscle. FXB is the force generated due to XBs undergoing cycling and stretching. Springs ($k_1$ and $k_2$) and dashpot (η) in parallel represent the passive cardiac muscle force response, which is independent of the XBs and dominates at very low and high frequencies. $F_{load}$ represents the afterload against which the muscle contracts during sarcomere (computational) shortening experiments.